Jim Curl has been the main organizer behind the unique and ultra cool Jake’s Off-Road Triathlon held in Treasure Beach for ten years now.  YardEdge caught up with Jim to find out what makes the Jake’s Triathlon so special!

YardEdge: Tell us about the Jake’s Triathlon? How and when did it get started?

Jim: Jake’s Off-Road Triathlon was founded by Jason Henzell in Spring 1995 as a way of thanking the Peace Corps volunteers in Treasure Beach, St. Elizabeth and Jamaica. It was originally called the Treasure Beach Triathlon, but I asked that the name be changed so we could take advantage of the international awareness of Jake’s Resort. At some point, it became a fund-riser for BREDS.

I met Jason in December 2000 (I was working on Reggae and JTB asked me to stop in and see if I could lend a hand). My first Jake’s event was April 2001. This is my 10th consecutive year.

YardEdge: What is your vision and objectives for the event?

Jim: I have actually used Jake’s in several US speeches, including my Hall of Fame induction, as an example of how to recognize when an event has such a basic attractiveness and vibe that developing it has to be a balance between getting more equipment, people, sponsorship, press, etc. (so as to have it ‘grow’ and get more money for the charity) and preserving the wonderful thing that has been placed in your hands. Treasure Beach itself is much like that as are so many of the Island Outpost resorts.

My vision and objectives are to keep Jake’s connected to and feeling like a natural product of the South Coast – local, hand-made, friendly, laid-back and one-of-a-kind. Of course it has to be very safe and well-run, but that is behind the scenes.

The more we can make Jake’s reflect its south-coast Jamaican-ness the better (in my view) it is. Why try to copy ‘international’ events when you can be the one and only Jake’s? Or Rose Hall or Reggae for that matter. Not every event or hotel is for everyone – understand what makes you special and base everything around that. And Jamaica is very special.

I would like to see the Treasure Beach Sports Festival (TBSF) grow and involve many many people from the South Coast and Jamaica. I would like to be able to help supply athletic equipment and facilities for the local kids.

I would like to see Jake’s Triathlon grow to about 150 competitors (it is just under 100 now), but have it and the TBSF also be a seasonal destination for athletes, spectators and families. I would like to see the ratio of Jamaicans to Internationals never be less than 3 to 1 Jamaican. I would like to see a ticket to Jake’s be one of the most treasured entries you can get. And, of course, I would like to raise enough money for BREDS and bring in enough families and spectators for Treasure Beach that we can meet our most extravagant financial goals.

Jim: Biggest challenges: Getting the word out about Jake’s internationally with no marketing budget to speak of. Most Jamaicans find their way. Facebook will hopefully be a real boon here.

Growing and improving Jake’s events while keeping the vibe.

Staying focused on an event that happens only once a year and has no face to face meetings before event week.

Keeping fresh and yet staying the same great Jake’s – “Amazing Jake’s” to parrot the words of the old hymn.

Rewards: Getting to work in TB for a week on an event and project (BREDS) I truly believe in.

Meeting and getting to know my Jamaican friends (present party included) and traveling around Jamaica itself.

Hanging out and enjoying the vibe at Jake’s or Jack Sprat’s or Pelican or the Henzell’s or the Russell’s at Rose Hall or Good Hope or Flagstaff or Oracabessa, or ……

Cooking dinner for friends at our house at Jake’s the week of the event – my old friend Larry is a world-class cook and that is a great way to end a busy day – with friends.

YardEdge: How does one enter? What’s happening this year?

Internationals should enter on-line at www.jakesoffroadtri.com and click on register.

Jamaicans can enter on-line or at Jake’s on Friday April 15 from noon-8:00pm.

On-site Registration and packet pick-up is ONLY on Friday April 15. No event day registration and very difficult to even get your number even if registered after Friday.

All registrants get a pasta dinner at Jake’s on Friday night as well as a custom (and always sold-out) Jake’s T-shirt.

Best awards in all of sports – hand made and painted “Jake’s Arrows” by Sallie Henzell – little treasures.

Course Talk is Friday night around 7:00pm or so at Jake’s.

Awards and beach party is Saturday April 16, starting around 5:00pm.

YardEdge: Tell us about the sports festival part of the event?

Jim: Treasure Beach Sports Festival was created to allow other athletic events and other non-triathletes (or even athletes) to take advantage of the increased people and sports equipment in TB for Jake’s. The Sunset Resort 5K Run/Walk is going into its 6th year and each year Jamaica Cycling usually come up with a series of good events, including bike races for kids, a hill climb, etc.

Participants can enter in Treasure Beach at Jake’s on Friday (5K is 5:00pm on Friday).

Last year we started Likkle Jake’s Kids Triathlon with Iona Wynter as event director and that is proving to be a wonderful addition. Three age categories plus relays!

Jim: PUMA is a new sponsor, as is Havainas and Island Car Rental.

Finishers will be given new Havainas flip-flops at the finish line and a bag to hold their (nasty) running shoes – ah – blessed cool feet!

YardEdge: Anything else you want to add?

Jim: You know KW, we give a special prize for the last finisher – the legendary “Purple Monkey”! It is life-changing – just ask Tamara Ward. I think that it has your name on it one of these years!

YardEdge: Thanks and hope to see you there! 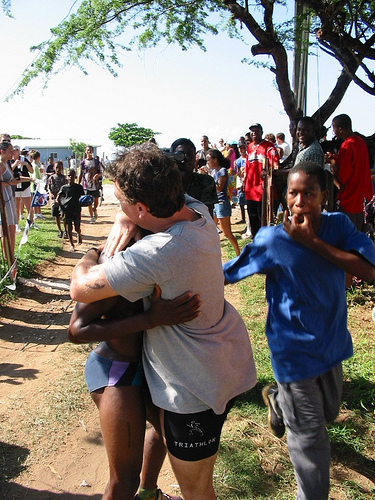 Take a Cultural Tour of Jamaica - JCE Schedule for 2011 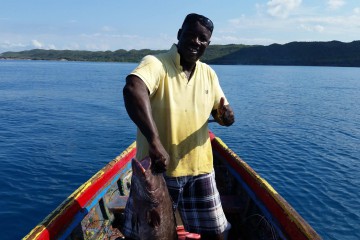 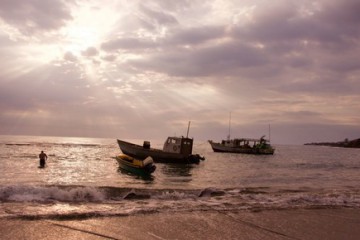