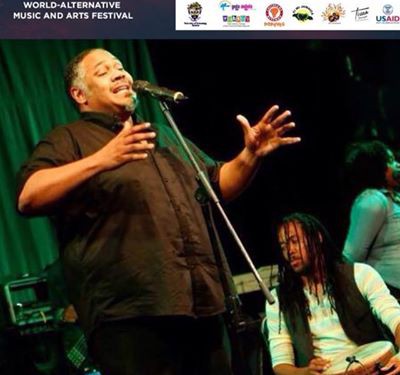 Gungo Walk World Alternative Music & Arts Festival‎ will be happening again this Saturday, September 3.  The Gungo Walk Festival headline event “Armchair Rebelution” will kick off at 9:30pm. After the day’s events if you are an All Access ticket holder ($1500) you get to enjoy both day and night activities.

Here’s a list of some of the more interesting events happening in Jamaica in January definitely worth checking out: JAN 12 Michael Sean Harris performing at Susie’s Bakery, Kingston For more info on event. For more on Michael Sean Harris, see YardEdge interview.

Check out this new song, written by Joy Mechanics (Michael Sean Harris and Mike Holgate) for Nadine Sutherland.  The song has gone to the #1 spot on the New York Reggae charts and is moving up on the South Florida Reggae chart. It’s called “Life on the Streets”. It’s available on

Kingston On The Edge Opening Night 2009

Michael Sean Harris & DeVices KOTE 2009 opened to a good crowd at Redbones Blues Cafe with a documentary by director Miquel Galofré entitled “Why Jamaicans Run So Fast”. This short film was a clever and reasonably balanced look at Jamaica’s track prowess and “why Jamaicans run so fast”, a

Read More
Happenings On The EdgeMusic

The E Park Band Performing At Jazz In The Gardens Sunday

This Sunday, Feb 22 at The Jamaica Pegasus, the E Park Band will be the featured act at Jazz In The Gardens. Featured vocalists are Michael Sean Harris and Karen Smith.

Also check out YardEdge’s interview with Michael Sean Harris, http://www.yardedge.net/music/on-managing-michael-sean-harris This is sure to be a great show!

Part 2 YardEdge: How would your life change if you were no longer allowed to create art? Michael Sean: I’d probably die of natural causes fairly quickly. YardEdge: What’s the best and worst parts of being an artist/musician? Michael Sean: The best is the joy I get from being inspired

Part 1 YardEdge: Why are you an artist/musician? Michael Sean: In the 1970’s there were little known genetic experiments being done on children born every other quarter of the hour. I was born at 7:15- it was just my turn…ok, that’s a lie -I was born one. The schools I