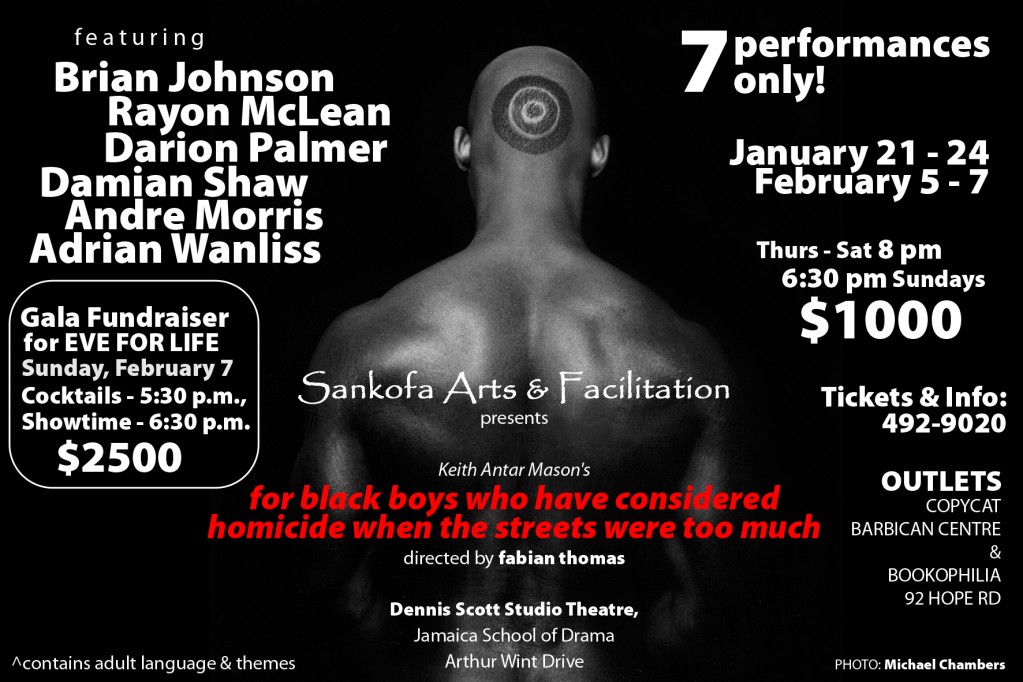 Sankofa Arts & Facilitation will present its first production for 2010 at the Dennis Scott Studio Theatre, Jamaica School of Drama from January 21 to February 7 for seven performances. Part proceeds from the opening night performance will be donated to the Jamaica Red Cross’ Haitian Earthquake Relief Initiative.

’for black boys who have considered homicide when the streets were too much’ is an unabashed and powerful exploration of the external/internal, public/private, political/personal questions and trials of being a black man. Written by Keith Antar Mason and directed by Fabian Thomas, ‘for black boys….’ utilizes poetry and spoken word to examine and depict the situations and scenarios performed by a cast of five men. It is a journey that travels through some of the harsh realities of our time as it moves towards healing and transformation. For the Jamaican premiere of ‘for black boys…’ Thomas has included Jamaican interpretations of some of the sections and has also included movement and music as parts of the tapestry of the piece.

Keith Antar Mason is a poet/performance artist/playwright based in the Los Angeles area and the artistic director of the Hittite Empire–a performance group whose work centers on the lives of Black men and the contradictions they face living in America. The group has performed at theaters and performance spaces from New York’s Lincoln Center to Los Angeles’ Mark Taper Forum. Keith’s work has been included in a number of poetry anthologies and his theater pieces have been staged throughout the U.S. and in Britain. Keith and the members of Hittite Empire dedicate a large part of their artistic effort to working among youth and developing progressive theater companies in the projects and poor neighborhoods of major cities throughout the U.S

Sankofa Arts & Facilitation will also be using the production to raise funds for EVE for Life to benefit boys at risk, to make a donation to Calabar High School (Thomas’ alma mater) and will also be hosting Jamaican photographer Michael Chambers (whose work is being used in the show) to conduct workshops for visual arts students and young men at risk.

* Not recommended for children under 16, unless with an adult who has been advised of the graphic nature (not pornographic) of some of the subject matter explored and occasional strong language.