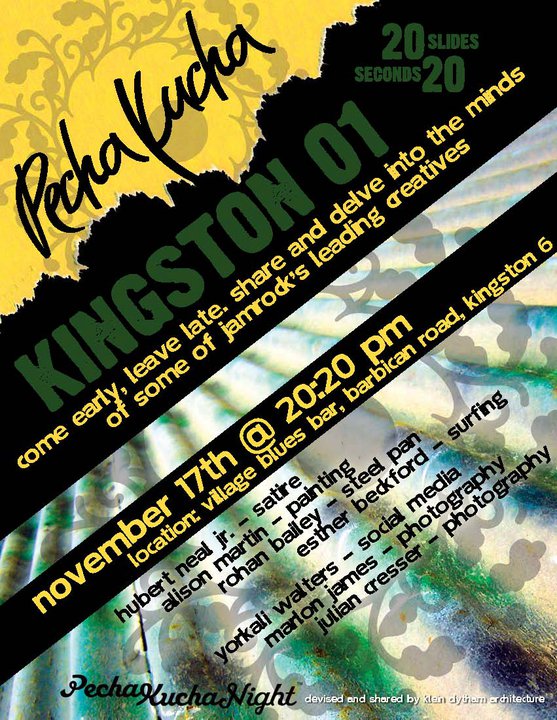 According to the main Pecha Kucha website “Pecha Kucha Night was devised in Tokyo in February 2003 as an event for young designers to meet, network, and show their work in public. It has turned into a massive celebration, with events happening in hundreds of cities around the world, inspiring creatives worldwide. Drawing its name from the Japanese term for the sound of “chit chat”, it rests on a presentation format that is based on a simple idea: 20 images x 20 seconds. It’s a format that makes presentations concise, and keeps things moving at a rapid pace”.

The intention is to create an environment where creative work can be easily and informally presented so that by the end of the event both presenters and attendees have had an opportunity to meet, network and show their work in public.

The organizers decided to host this event in Kingston because although there is much creative work in the city much of it goes unnoticed. The intention is to stage the event every 3 to 4 months.

David Cuthbert, one of the main organizers, is a local architect and has been a lecturer at the University of Technology, in the Faculty of the Built Environment’s Caribbean School of Architecture (CSA)  for the last 3 years. He is an avid blogger, creator of architechnophilia, a blog that exhibits Caribbean and international architecture.

Michaelia Henry is also co-hosting the event and is a Masters of Architecture student at CSA.