TAPESTRY: A Fresh, Colourful Thread in the Fabric of Jamaican Theatre 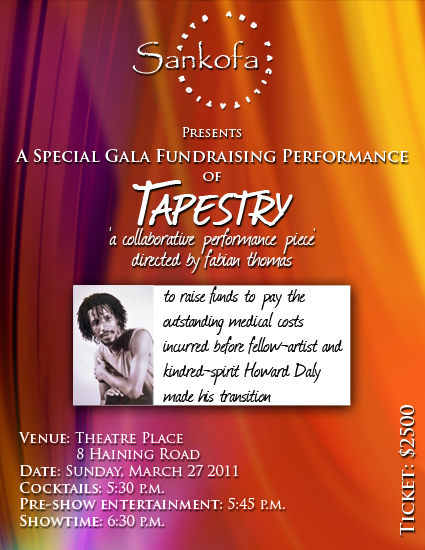 Sankofa Arts & Facilitation’s first production for 2011 will take the form of an original and provocative experimental performance piece called TAPESTRY.

This looks like it’s going to be an amazing theatrical performance and well worth checking out!!

TAPESTRY’s World Premiere will be on February 27th as part of the Arts Festival at the Phillip Sherlock Centre for the Creative Arts, University of the West Indies, Mona Campus. The production will then have a 3-week commercial run at the Theatre Place, 8 Haining Road from March 10th to 27th.

In describing his latest brainchild, director/producer Fabian Thomas had this to say: “TAPESTRY was brought to life using improvisation and dramaturgy as the method of creating a new script that has been whirling about in my head for years. I steadfastly resisted the urge to simply write a script, but instead wanted a creative, intuitive and inside-out process that would involve the actors and I taking this journey together, starting with a story, headline, idea or crazy thought and exploring what these would look, sound, feel like when we gave them words, flesh and form.

The result is a pot pourri of vignettes that tell the stories of various people living in Jamaica. I am delighted at and inspired by how the cast has responded to this process: their enthusiasm, creativity and passion have been a blessing! This collaborative creative journey has birthed a bold, brash, painful, funny, confusing, enlightening and rich piece of art that has exceeded my hopes and imagination.”

TAPESTRY will present scenarios that examine the legacy of divorce, the triumph of love, the aftermath of the murder of a child, the return of an absentee father, surviving the violation of rape, the process of a support group for the parents with lesbian, gay and transgendered children, domestic abuse, living with HIV, the toll of crime and violence, the power of faith and prayer and other topical issues.

In addition to bringing a fresh and powerful theatrical offering to the Jamaican and World stage, Sankofa Arts & Facilitation will also be using the production to raise funds to assist 4 students (1 primary, 1 secondary and 2 tertiary) with tuition/school fees, for 2 places of safety and 2 families in crisis. There will also be three (3) special performances for schools with a panel discussion and question and answer segment after each performance.

TAPESTRY: A Fresh, Colourful Thread in the Fabric of Jamaican Theatre