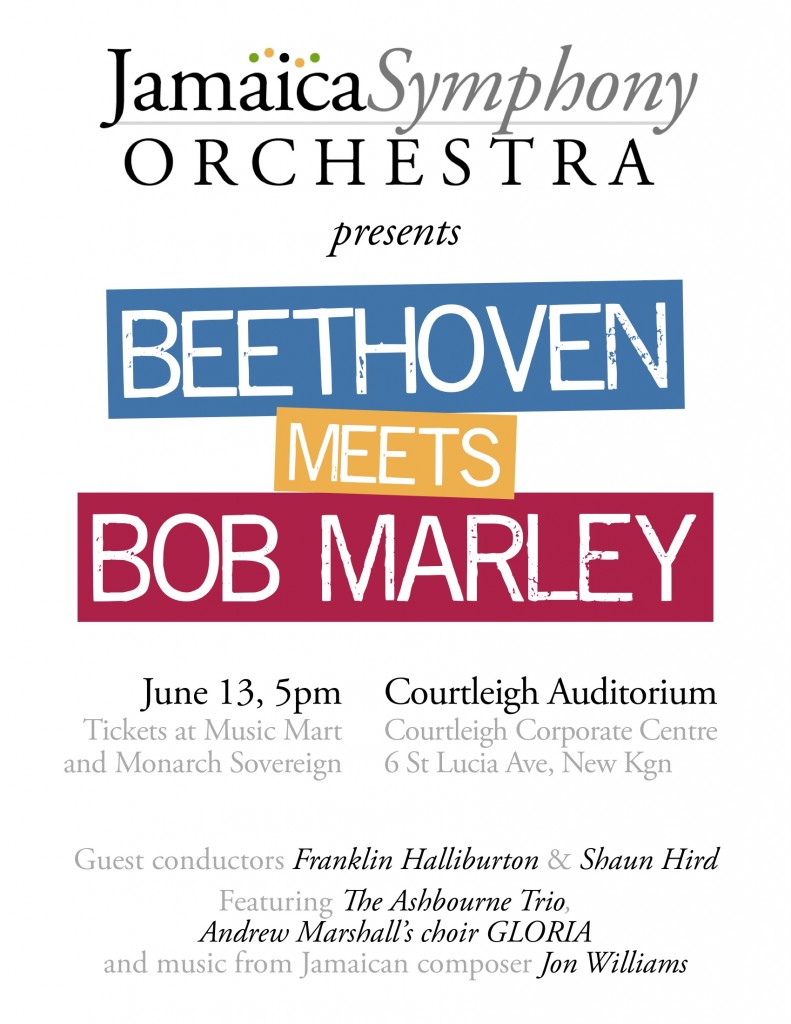 On Sunday June 13th 2010 the JSO will stage ‘Beethoven Meets Bob Marley’ the first show of its 2010 Concert Series.

‘Beethoven meets Bob Marley’ explores several genres of music from classical to the contemporary. The music of eighteenth century German composer Ludwig van Beethoven will be heard alongside folk music, memorable movie soundtracks and the reggae music of Bob Marley arranged and orchestrated by the multi-talented Jamaican musician Jon Williams.

The orchestra will be conducted by Mr. Franklin Halliburton, Mr. Albert Shaun Hird and Mr. Rafael Salazar, all accomplished musicians who have contributed to the development of instrumental music in Jamaica.

The concert will be held at the Courtleigh Auditorium New Kingston, commencing at 5pm. Tickets are $1000.00 and are available at The Music Mart, Twin Gates Plaza, Half Way Tree Road and Monarch Pharmacy, Sovereign Centre Liguanea.

The Jamaica Symphony Orchestra (JSO) was founded in Mandeville in 2008 by violinist and music educator Dr Lisa Walker. To become more accessible, the JSO established a Kingston branch in 2009 and has since become an outlet for talented musicians from all across the island who wish to hone their skills through orchestral music.

While the typical symphony orchestra has only four sections: Strings, Woodwind, Brass and Percussion; the JSO has distinguished itself by including the steel pan, which originates from Trinidad and Tobago, as a fifth, equal section of the orchestra. This additional section gives the JSO a distinctly Caribbean sound.