This is an exerpt from Martin Mordecai’s new novel, Blue Mountain Trouble

. You can read YardEdge’s interview with the author here.

For Pollyread and Jackson, walking down to school around the same time each morning was the same and slightly different. The twins lived in Top Valley, a village high in the Blue Mountains. “On God shoulder,” Mama said. Mornings sometimes, when cloud and mist were all around, there you’d be on God’s shoulder and you couldn’t see his face or his feet. (“Only his belly button,” Pollyread said once, looking around for Mama, shocked at her own boldness – and never said it again.)

They looked down the path they were walking, and where a moment ago there was Stedman’s Corner and Marcus Garvey Primary, then Cross Point, then Cuthbert Bank and Content Gap, in steps that a drunk giant might take to the hazyblue sea far below – now all of a sudden there was only cloud, thick as Mama’s soup, slicking the grass and stones with moisture and making the path where they walked all their life mysterious and new, and sometimes dangerous.

This Tuesday morning the whole world seemed to be moving. The clouds played hide-and-seek with the sun in the steep valleys. You could almost hear them laughing as they twirled around like sails. Pollyread in front, they went carefully down the steep, winding path, walking around the larger boulders, stepping over the gleaming stones. Mama would not forgive them for slipping and getting their uniforms dirty.

Around them, hilltops, stones, sometimes single trees thrust like fists or fingers through the swirling clouds. All of them familiar, all of them, this morning, new, different.

And this morning, out of that green-and-white mystery of stones and floating trees, out of it this perfectly normal Tuesday morning came the goat.

One moment there was just the clouds and the rocks and the bush, the next moment it was there. Huge, its dark head with grandpa beard unfurling a pair of horns like Jericho trumpets.

There, floating in the path, in a pool of brightness from an unseen sun. The twins could only see a huge head, with billowing beard and horns like they had never before seen, on a goat or any other creature. It was like a mask, of a size that would’ve had a body as big as a minibus carrying it. Unsupported, it floated next to a big round rock – just where they would walk.

The twins stopped dead. There was no way around it. The goat’s eyes pinned them, flashing dark fire. The eyes seemed sightless but seeing everything too, down into the very darkest corners of their terror. For a second or two, all was still: the goat-mask, the twins, even the clouds. They saw something like teeth. The goat tossed its head.

Then the cloud shifted and it wasn’t there anymore. As effortlessly as it had appeared, made of cloud but very real, it was gone.

The rock behind it reappeared, humpbacked, familiar. Cloud rolled away on silent wheels, unfurling the valley and hillsides like a banner. The twins were surrounded by things well-known and intimate, comforting as Mama’s arms. But they were shivering.

Jackson’s hand touched Pollyread from behind. “Go on nuh?” She didn’t, couldn’t move.

Then the ground vibrated beneath them. As if Jackson’s touch had tilted it. The hump of rock that the goat-head had hung in front of trembled. The guango tree behind it shook with a sound like rattling teeth. And as they watched, the hillside in front of them slipped away and crashed into Bamboo River below. They looked down: A meter ahead of their feet was -nothing. What was left of the hillside looked torn and bleeding, earth dribbling away like blood.

Birdsong and the soft rattle of leaves filled the pool of silence that settled around them.

Pollyread and Jackson looked into each other’s wide bottomless terror. First, the goat. Then . . . it hadn’t rained for weeks, the earth hard as cement. There seemed no reason for the landslide.

is available in Jamaica through Book Merchant Ltd. and on Amazon.com here 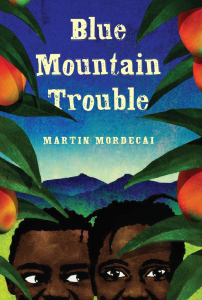