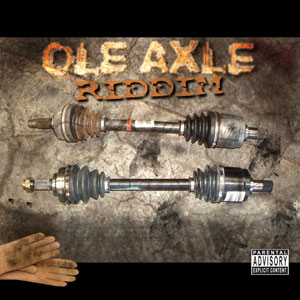 The Ole Axle Riddim features tracks from Monster Hemp Higher, Junior Cat, Munga Honourable and Vybz Kartel among others. With this solid mixture of new and established dancehall talent, initial singles from the “Ole Axle” riddim have already seen chart action in Jamaica, the rest of the Caribbean as well as on the BBC.

According to Truckback’s Adrian Locke, “Music and trucks have always been a major part of the lives of the Truckback family. We found our FIRST GEAR from the Gear Box riddim and now we’re ROTATING the Ole Axle riddim; so the Truck will keep MOVING in the streets, taking music TO THE WORLD. Look out for the CLUTCH and SPRING BLADE.”

Relative newcomers to the scene, Truckback Records takes its name from its studio and offices which are cleverly situated inside a former moving van. Despite its innocuous location, however, the production company, label and studio have become one of the hottest properties in Jamaican music, and owners Adrian, Andrew and Steve Locke have solidly established themselves as leaders of the new school.

All trained musicians who can play among them the keyboards, guitar and drums, the Locke brothers have chosen to focus on producing, especially after their success with the “Gear Box” riddim. (All Truckback riddims have truck related names, including the “Clutch”, “Springblade”, and now the “Ole Axle” riddim).

Truckback Records is now working on an album for their upcoming artist Baijie, while also creating some dancehall tracks with well known Trinidadian artist Bunji Garlin. By focusing on creating new songs specifically for their riddims, Truckback Records have a truly original sound.

The Ole Axle Riddim is available on leading digital retailers and mobile providers worldwide via Rebelmix. Click the links below to buy it now:

Download the one-sheet for the Ole Axle Riddim here.

One Island, Two Jamaicas and a Whole Heap of Difference

Could Dancehall Be The Ruination Of Reggae?