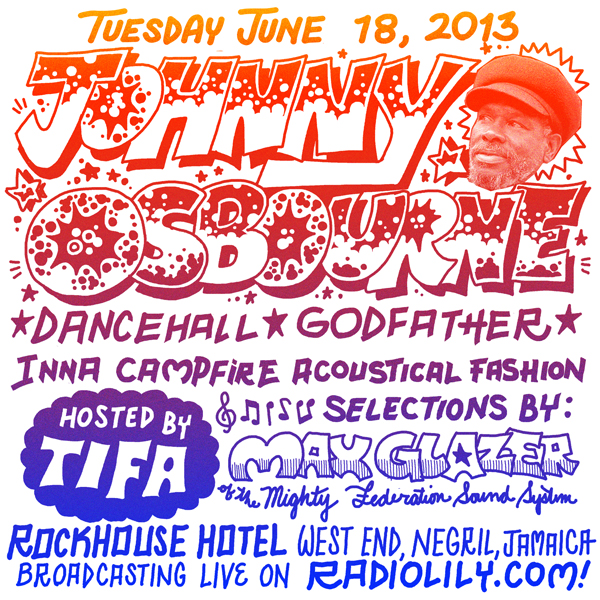 Rockhouse Hotel & Spa and Pushcart Restaurant in Negril are pleased to announce the second installment of their monthly outdoor, acoustic, concert series.

Each month, Rockhouse will honor Jamaica’s rich musical tradition by presenting important artists spanning the decades and genres of ska, reggae, and dancehall.

The series will showcase each artist with an intimate and elegant acoustic campfire performance taking place on the cliffs overlooking the Negril’s beautiful Pristine Cove.

Each installment of the series will feature international DJ / selector talent and will be broadcast live on Radio Lily, the online radio station of Rockhouse’s New York City sister property, the ultra-popular Miss Lily’s restaurant.

Know as “The Godfather of Dancehall,” Osbourne encapsulates the very essence of this musical series with a career containing hits that have spanned Jamaican music’s most important eras.

Johnny has turned out hits for virtually every legendary reggae and dancehall producer including the Studio One classic, “Truths And Rights,” the Winston Riley / Techniques produced “Come Back Darling”, “Ice Cream Love” with Henry “Junjo” Lawes, the timeless “Reasons” for Steelie & Cleevie, and an arsenal of massive tunes with King Jammy including “Water Pumping”, “Rock It Tonight”, and, of course, “Budy Bye”. Always “Up to di time”, Osbourne’s classic, “Mr. Marshall” was even sampled within the last year for the Major Lazer hit, “Jah No Partial.”

Serving to spotlight the many facets of Jamaican music, each installment of this series will “tun up” after the acoustic performance with a DJ set by the world-renowned Brooklyn DJ, Max Glazer of the Federation Sound System.

Glazer has been the official tour DJ for countless artists including Rihanna, Sean Paul, Wayne Wonder, and Cham and the early mix CDs he has produced for artists including Vybz Kartel have played an integral part in boosting many artists’ careers, internationally.

Also a welcome addition to this installment of the series is dancehall star Tifa who will be hosting the festivities… and possibly doing a few tunes herself!

A portion of all proceeds from the event series will go to the Rockhouse Foundation, the hotel’s non-profit organization that has invested over US $2,000,000 in building and refurbishing public schools and libraries in Western Jamaica.

The Rockhouse Hotel is a boutique hotel situated along the cliffs of the breathtaking Pristine Cove in Negril, Jamaica.

The casually elegant escape was named at the World Travel Awards as the “Caribbean’s leading boutique hotel” and Travel + Leisure awarded Rockhouse their “Global Vision Award”, citing the hotel’s devotion to sustainability and community work through the Rockhouse Foundation.

Rockhouse has also been named in Conde Nast Traveler’s “Best In The World” list and the hotel is also featured as a must-visit place in Patricia Schultz’ best-selling book, “1000 Places To See Before You Die.”

ABOUT THE ROCKHOUSE FOUNDATION

Climate Change and the Caribbean - What Do We Need To Know?